Cognitive deficits in patients with a chronic vestibular failure 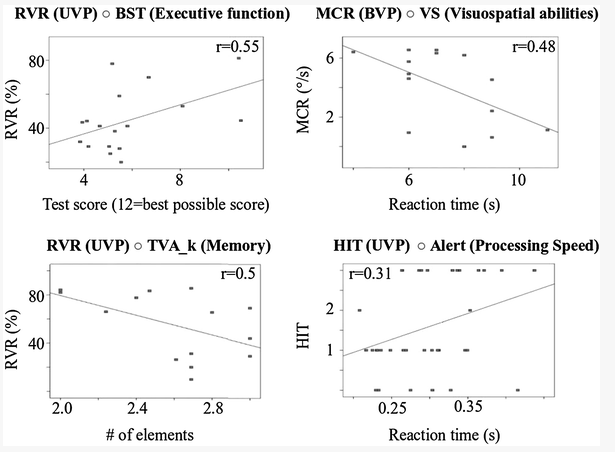 Behavioral studies in rodents and humans have demonstrated deficits of spatial memory and orientation in bilateral vestibular failure (BVF). Our aim was to explore the functional consequences of chronic vestibular failure on different cognitive domains including spatial as well as non-spatial cognitive abilities. Sixteen patients with a unilateral vestibular failure (UVF), 18 patients with a BVF, and 17 healthy controls (HC) participated in the study. To assess the cognitive domains of short-term memory, executive function, processing speed and visuospatial abilities the following tests were used: Theory of Visual Attention (TVA), TAP Alertness and Visual Scanning, the Stroop Color-Word, and the Corsi Block Tapping Test. The cognitive scores were correlated with the degree of vestibular dysfunction and the duration of the disease, respectively. Groups did not differ significantly in age, sex, or handedness. BVF patients were significantly impaired in all of the examined cognitive domains but not in all tests of the particular domain, whereas UVF patients exhibited significant impairments in their visuospatial abilities and in one of the two processing speed tasks when compared independently with HC. The degree of vestibular dysfunction significantly correlated with some of the cognitive scores. Neither the side of the lesion nor the duration of disease influenced cognitive performance. The results demonstrate that vestibular failure can lead to cognitive impairments beyond the spatial navigation deficits described earlier. These cognitive impairments are more significant in BVF patients, suggesting that the input from one labyrinth which is distributed into bilateral vestibular circuits is sufficient to maintain most of the cognitive functions. These results raise the question whether BVF patients may profit from specific cognitive training in addition to physiotherapy.