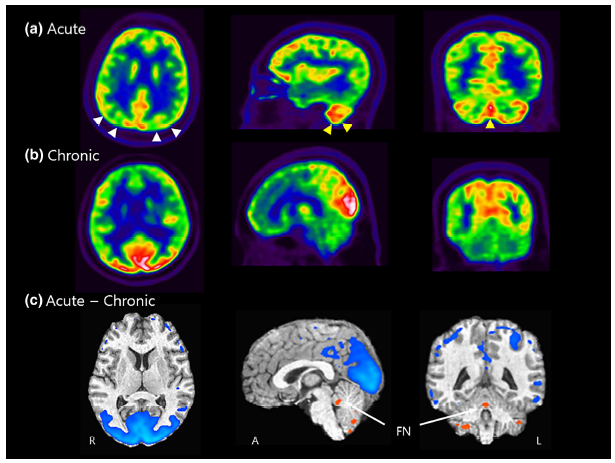 To investigate structural, metabolic, and functional connectivity changes in visual and oculomotor structures in a patient with paraneoplastic opsoclonus-myoclonus syndrome, serial resting-state functional and structural MRI, and FDG-PET data were collected during the acute stage and later on when the opsoclonus had resolved. In the acute stage, an FDG-PET scan demonstrated a substantially increased metabolism in structures around the deep cerebellar nuclei [e.g., fastigial nucleus (FN)] and a relatively reduced metabolism in the bilateral occipital lobes which normalized over 12 months. Functional connectivity increased initially between the seeds of the oculomotor and visual systems, including the primary and motion-sensitive visual cortex, frontal eye fields, superior colliculus, and cerebellar oculomotor vermis (OMV), and then decreased in the chronic stage as the symptoms resolved. The functional connectivity between the OMV and FN showed a positive correlation during the acute stage, which decreased later on. We provide a descriptive presentation of the changes of abnormal functional connectivity throughout visuo-oculomotor brain areas during opsoclonus and suggest directions for further research on the pathogenesis of opsoclonus.