The Role of APP in Structural Spine Plasticity 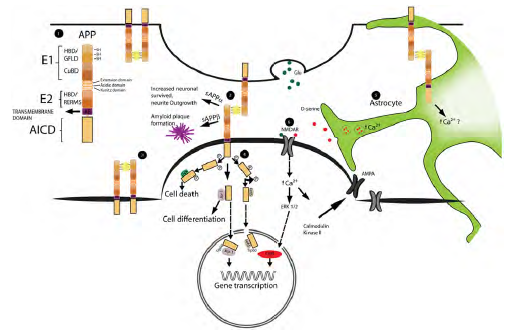 Amyloid precursor protein (APP) is a transmembrane protein highly expressed in neurons. The full-length protein has cell-adhesion and receptor-like properties, which play roles in synapse formation and stability. Furthermore, APP can be cleaved by several proteases into numerous fragments, many of which affect synaptic function and stability. This review article focuses on the mechanisms of APP in structural spine plasticity, which encompasses the morphological alterations at excitatory synapses. These occur as changes in the number and morphology of dendritic spines, which correspond to the postsynaptic compartment of excitatory synapses. Both overexpression and knockout (KO) of APP lead to impaired synaptic plasticity. Recent data also suggest a role of APP in the regulation of astrocytic D-serine homeostasis, which in turn regulates synaptic plasticity.