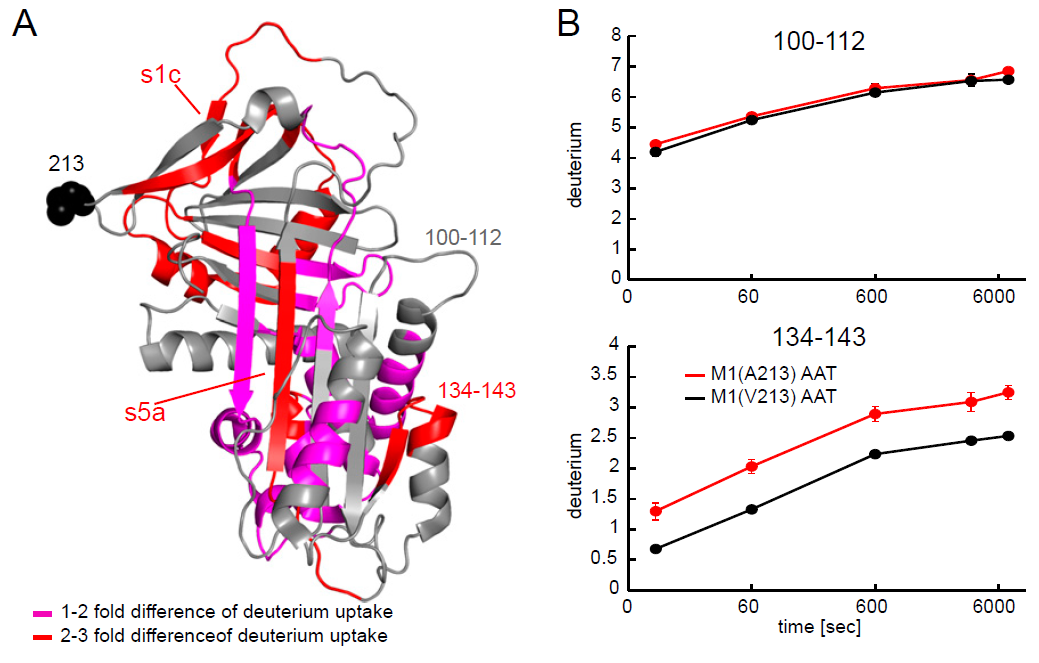 Large artery atherosclerotic stroke (LAS) shows substantial heritability not explained by previous genome-wide association studies. Here, we explore the role of coding variation in LAS by analyzing variants on the HumanExome BeadChip in a total of 3,127 cases and 9,778 controls from Europe, Australia, and South Asia. We report on a nonsynonymous single-nucleotide variant in serpin family A member 1 (SERPINA1) encoding alpha-1 antitrypsin [AAT; p.V213A; P = 5.99E-9, odds ratio (OR) = 1.22] and confirm histone deacetylase 9 (HDAC9) as a major risk gene for LAS with an association in the 3'-UTR (rs2023938; P = 7.76E-7, OR = 1.28). Using quantitative microscale thermophoresis, we show that M1 (A213) exhibits an almost twofold lower dissociation constant with its primary target human neutrophil elastase (NE) in lipoprotein-containing plasma, but not in lipid-free plasma. Hydrogen/deuterium exchange combined with mass spectrometry further revealed a significant difference in the global flexibility of the two variants. The observed stronger interaction with lipoproteins in plasma and reduced global flexibility of the Val-213 variant most likely improve its local availability and reduce the extent of proteolytic inactivation by other proteases in atherosclerotic plaques. Our results indicate that the interplay between AAT, NE, and lipoprotein particles is modulated by the gate region around position 213 in AAT, far away from the unaltered reactive center loop (357-360). Collectively, our findings point to a functionally relevant balance between lipoproteins, proteases, and AAT in atherosclerosis.