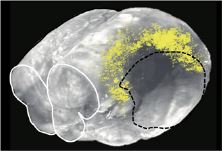 Neuroinflammation contributes substantially to stroke pathophysiology. Cerebral invasion of peripheral leukocytes-particularly T cells-has been shown to be a key event promoting inflammatory tissue damage after stroke. While previous research has focused on the vascular invasion of T cells into the ischemic brain, the choroid plexus (ChP) as an alternative cerebral T-cell invasion route after stroke has not been investigated. We here report specific accumulation of T cells in the peri-infarct cortex and detection of T cells as the predominant population in the ipsilateral ChP in mice as well as in human post-stroke autopsy samples. T-cell migration from the ChP to the peri-infarct cortex was confirmed by in vivo cell tracking of photoactivated T cells. In turn, significantly less T cells invaded the ischemic brain after photothrombotic lesion of the ipsilateral ChP and in a stroke model encompassing ChP ischemia. We detected a gradient of CCR2 ligands as the potential driving force and characterized the neuroanatomical pathway for the intracerebral migration. In summary, our study demonstrates that the ChP is a key invasion route for post-stroke cerebral T-cell invasion and describes a CCR2-ligand gradient between cortex and ChP as the potential driving mechanism for this invasion route.