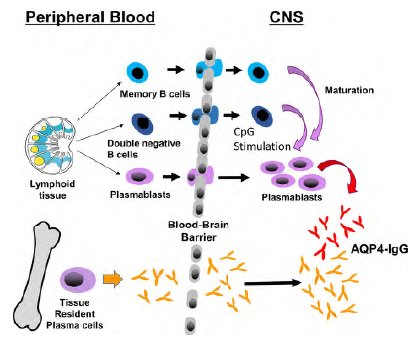 OBJECTIVES:
Neuromyelitis optica spectrum disorder (NMOSD) is a severe inflammatory disorder of the central nervous system (CNS) targeted against aquaporin-4 (AQP4). The origin and trafficking of AQP4-specific B cells in NMOSD remains unknown.

INTERPRETATION:
During an acute NMOSD relapse, a dynamic exchange of B cells occurs between the periphery and CNS with AQP4-specific CSF B cells emerging from postgerminal center memory B cells and plasmablasts. Expansion of the PB DN B-cell compartment may be a potential biomarker of NMOSD activity.