Glial Cells and Their Function in the Adult Brain: A Journey through the History of Their Ablation 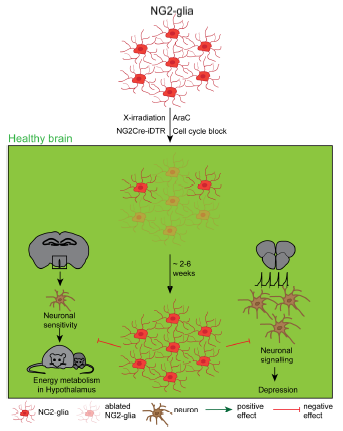 Glial cells, consisting of microglia, astrocytes, and oligodendrocyte lineage cells as their major components, constitute a large fraction of the mammalian brain. Originally considered as purely non-functional glue for neurons, decades of research have highlighted the importance as well as further functions of glial cells. Although many aspects of these cells are well characterized nowadays, the functions of the different glial populations in the brain under both physiological and pathological conditions remain, at least to a certain extent, unresolved. To tackle these important questions, a broad range of depletion approaches have been developed in which microglia, astrocytes, or oligodendrocyte lineage cells (i.e., NG2-glia and oligodendrocytes) are specifically ablated from the adult brain network with a subsequent analysis of the consequences. As the different glial populations are very heterogeneous, it is imperative to specifically ablate single cell populations instead of inducing cell death in all glial cells in general. Thanks to modern genetic manipulation methods, the approaches can now directly be targeted to the cell type of interest making the ablation more specific compared to general cell ablation approaches that have been used earlier on. In this review, we will give a detailed summary on different glial ablation studies, focusing on the adult mouse central nervous system and the functional readouts. We will also provide an outlook on how these approaches could be further exploited in the future.