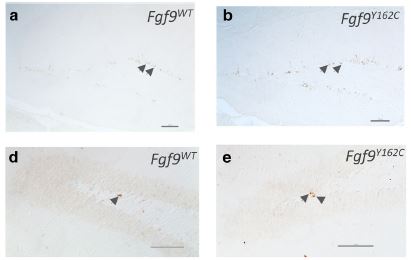 In neuropsychiatric diseases, such as major depression and anxiety, pathogenic vulnerability is partially dictated by a genetic predisposition. The search continues to define this genetic susceptibility and establish new genetic elements as potential therapeutic targets. The fibroblast growth factors (FGFs) could be interesting in this regard. This family of signaling molecules plays important roles in development while also functioning within the adult. This includes effects on aspects of brain function such as neurogenesis and synapse formation. Of this family, Fgf9 is expressed in the adult brain, but its functional role is less well defined. In this study, we examined the role of Fgf9 in different brain functions by analyzing the behavior of Fgf9 Y162C mutant mice, an Fgf9 allele without the confounding systemic effects of other Fgf9 genetic models. Here, we show that this mutation caused altered locomotor and exploratory reactivity to novel, mildly stressful environments. In addition, mutants showed heightened acoustic startle reactivity as well as impaired social discrimination memory. Notably, there was a substantial decrease in the level of adult olfactory bulb neurogenesis with no difference in hippocampal neurogenesis. Collectively, our findings indicate a role for the Fgf9 Y162C mutation in information processing and perception of aversive situations as well as in social memory. Thus, genetic alterations in Fgf9 could increase vulnerability to developing neuropsychiatric disease, and we propose the Fgf9 Y162C mutant mice as a valuable tool to study the predictive etiological aspects.