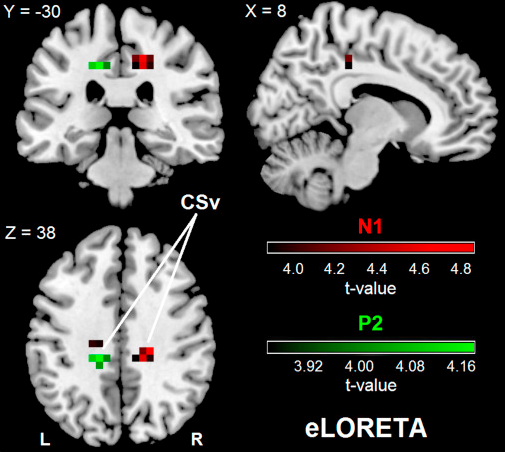 The vestibular organ senses linear and rotational acceleration of the head during active and passive motion. These signals are necessary for bipedal locomotion, navigation, the coordination of eye and head movements in 3D space. The temporal dynamics of vestibular processing in cortical structures have hardly been studied in humans, let alone with natural stimulation.

The aim was to investigate the cortical vestibular network related to natural otolith stimulation using a hexapod motion platform. We conducted two experiments, 1. to estimate the sources of the vestibular evoked potentials (VestEPs) by means of distributed source localization (n=49), and 2. to reveal modulations of the VestEPs through the underlying acceleration intensity (n=24). For both experiments subjects were accelerated along the main axis (left/right, up/down, fore/aft) while the EEG was recorded.

We were able to identify five VestEPs (P1, N1, P2, N2, P3) with latencies between 38 and 461 ms as well as an evoked beta-band response peaking with a latency of 68 ms in all subjects and for all acceleration directions. Source localization gave the cingulate sulcus visual (CSv) area and the opercular-insular region as the main origin of the evoked potentials. No lateralization effects due to handedness could be observed. In the second experiment, area CSv was shown to be integral in the processing of acceleration intensities as sensed by the otolith organs, hinting at its potential role in ego-motion detection. These robust VestEPs could be used to investigate the mechanisms of inter-regional interaction in the natural context of vestibular processing and multisensory integration.