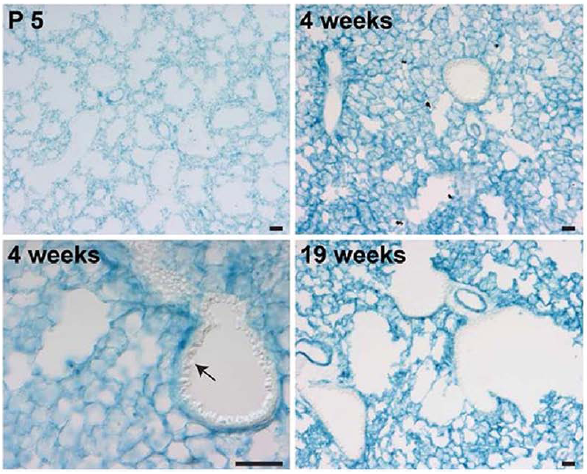 Paladin (Pald1, mKIAA1274 or x99384) was identified in screens for vascular-specific genes and is a putative phosphatase. Paladin has also been proposed to be involved in various biological processes such as insulin signaling, innate immunity and neural crest migration. To determine the role of paladin we have now characterized the Pald1 knock-out mouse in a broad array of behavioral, physiological and biochemical tests. Here, we show that female, but not male, Pald1 heterozygous and homozygous knock-out mice display an emphysema-like histology with increased alveolar air spaces and impaired lung function with an obstructive phenotype. In contrast to many other tissues where Pald1 is restricted to the vascular compartment, Pald1 is expressed in both the epithelial and mesenchymal compartments of the postnatal lung. However, in Pald1 knock-out females, there is a specific increase in apoptosis and proliferation of endothelial cells, but not in non-endothelial cells. This results in a transient reduction of endothelial cells in the maturing lung. Our data suggests that Pald1 is required during lung vascular development and for normal function of the developing and adult lung in a sex-specific manner. To our knowledge, this is the first report of a sex-specific effect on endothelial cell apoptosis.