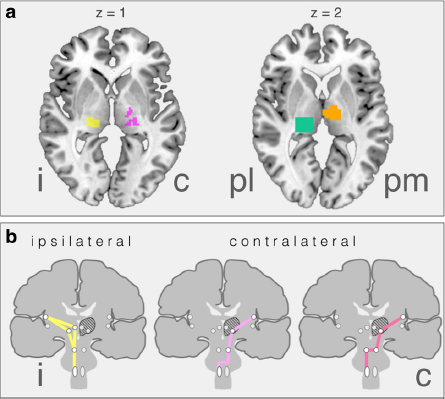 MRI diffusion tensor imaging tractography was performed on the bilateral vestibular brainstem pathways, which run from the vestibular nuclei via the paramedian and posterolateral thalamic subnuclei to the parieto-insular vestibular cortex. Twenty-one right-handed healthy subjects participated. Quantitative analysis revealed a rope-ladder-like system of vestibular pathways in the brainstem with crossings at pontine and mesencephalic levels. Three structural types of right-left fiber distributions could be delineated: (1) evenly distributed pathways at the lower pontine level from the vestibular nuclei to the pontine crossing, (2) a moderate, pontomesencephalic right-sided lateralization between the pontine and mesencephalic crossings, and (3) a further increase of the right-sided lateralization above the mesencephalic crossing leading to the thalamic vestibular subnuclei. The increasing lateralization along the brainstem was the result of an asymmetric number of pontine and mesencephalic crossing fibers which was higher for left-to-right crossings. The dominance of the right vestibular meso-diencephalic circuitry in right-handers corresponds to the right-hemispheric dominance of the vestibular cortical network. The structural asymmetry apparent in the upper brainstem might be interpreted in relation to the different functions of the vestibular system depending on their anatomical level: a symmetrical sensorimotor reflex control of eye, head, and body mediated by the lower brainstem; a lateralized right-sided upper brainstem-thalamic function as part of the dominant right-sided cortical/subcortical vestibular system that enables a global percept of body motion and orientation in space.