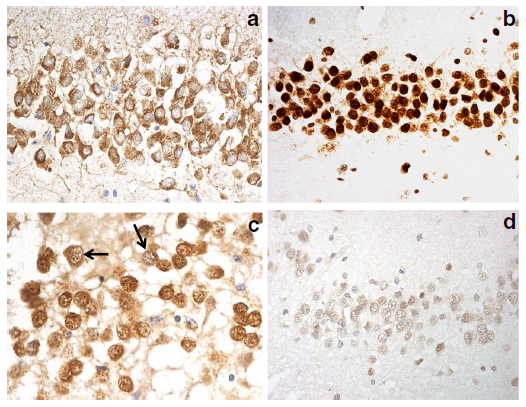 Frontotemporal Lobar Degeneration (FTLD) encompasses certain related neurodegenerative disorders which alter behaviour, personality and language. Heterogeneous ribonuclear proteins (hnRNPs) maintain RNA metabolism and changes in their function may underpin the pathogenesis of FTLD. Immunostaining for hnRNP A1, A2/B1 and A3 was performed on sections of temporal cortex with hippocampus from 61 patients with FTLD, stratified by pathological hallmarks into FTLD-tau and FTLD-TDP type A, B and C subtypes, and by genetics into patients with C9orf72 expansions, MAPT or GRN mutations, or those without known mutation. Four patients with Motor Neurone Disease (MND) with C9orf72 expansions and 10 healthy controls were also studied. Semi-quantitative analysis assessed hnRNP staining intensity in dentate gyrus (DG) and CA4 region of hippocampus, and temporal cortex (Tcx) in the different pathological and genetic groups.Immunostaining for hnRNP A1, A2/B1 and A3 revealed no consistent changes in pattern or amount of physiological staining across any of the pathological or genetic groups. No immunostaining of any inclusions resembling TDP-43 immunoreactive neuronal cytoplasmic inclusions or dystrophic neurites, was seen in either Tcx or DG of the hippocampus in any of the FTLD cases investigated for hnRNP A1, A2/B1 and A3. However, immunostaining for hnRNP A3 showed that inclusion bodies, resembling those TDP-43 negative, p62-immunopositive structures containing dipeptide repeat proteins (DPR) were variably observed in hippocampus and cerebellum. The proportion of cases showing hnRNP A3-immunoreactive DPR, and the number of hnRNP A3-positive inclusions within cases, was significantly greater in DG than in cells of CA4 region and cerebellum, but the latter was significantly less in all three regions compared to that detected by p62 immunostaining.