Heterotopic Transcallosal Projections Are Present throughout the Mouse Cortex 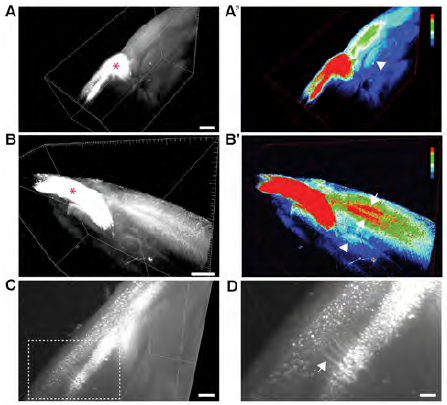 Transcallosal projection neurons are a population of pyramidal excitatory neurons located in layers II/III and to a lesser extent layer V of the cortex. Their axons form the corpus callosum thereby providing an inter-hemispheric connection in the brain. While transcallosal projection neurons have been described in some detail before, it is so far unclear whether they are uniformly organized throughout the cortex or whether different functional regions of the cortex contain distinct adaptations of their transcallosal connectivity. To address this question, we have therefore conducted a systematic analysis of transcallosal projection neurons and their axons across six distinct stereotactic coordinates in the mouse cortex that cover different areas of the motor and somatosensory cortices. Using anterograde and retrograde tracing techniques, we found that in agreement with previous studies, most of the transcallosal projections show a precise homotopic organization. The somata of these neurons are predominantly located in layer II/III and layer V but notably smaller numbers of these cells are also found in layer IV and layer VI. In addition, regional differences in the distribution of their somata and the precision of their projections exist indicating that while transcallosal neurons show a uniform organization throughout the mouse cortex, there is a sizeable fraction of these connections that are heterotopic. Our study thus provides a comprehensive characterization of transcallosal connectivity in different cortical areas that can serve as the basis for further investigations of the establishment of inter-hemispheric projections in development and their alterations in disease.