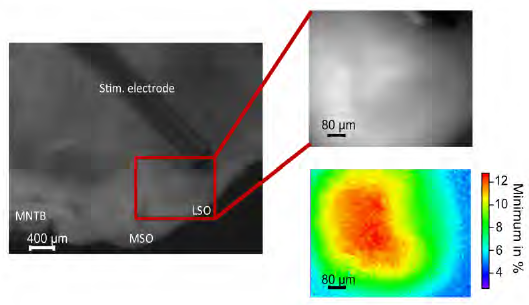 The correlation between neuronal activity and metabolism is essential for coding, plasticity, neurological disorders and the interpretation of functional neuroimaging data. Most likely, metabolic requirements depend upon neuron type and macroscopic energy demands vary with brain region. However, specific needs of individual neuron types are enigmatic. Therefore, we monitored metabolic activity in the lateral superior olive (LSO), an auditory brainstem nucleus containing only one neuron type. LSO neurons exhibit extreme but well described biophysics with firing rates of several hundred hertz and low input resistances of a few megaohms. We recorded changes in NADH and FAD autofluorescence and O2 concentration in acute brainstem slices of Mongolian gerbils (Meriones unguiculatus) following electrical stimulation. The LSO shows the typical biphasic NADH/FAD response up to a physiologically relevant frequency of 400 Hz. In the same animal, we compared the LSO with the hippocampal CA1 region and the cerebral cortex. The rate of NADH/FADH2 consumption and regeneration was slowest in LSO. However frequency dependence was only similar during the consumption phase but varied during regeneration within the three brain regions. Changes in NADH, FAD and O2 levels and blocking metabolic reactions indicate a pronounced contribution of mitochondrial oxidative phosphorylation in the LSO which is known for the other brain regions as well. Lactate transport and interconversion is involved in LSO metabolism as we found in immunohistochemical and pharmacological experiments. Our findings show that the LSO represents an apt, biophysically distinct model for brain metabolism and that neuronal properties determine metabolic needs.