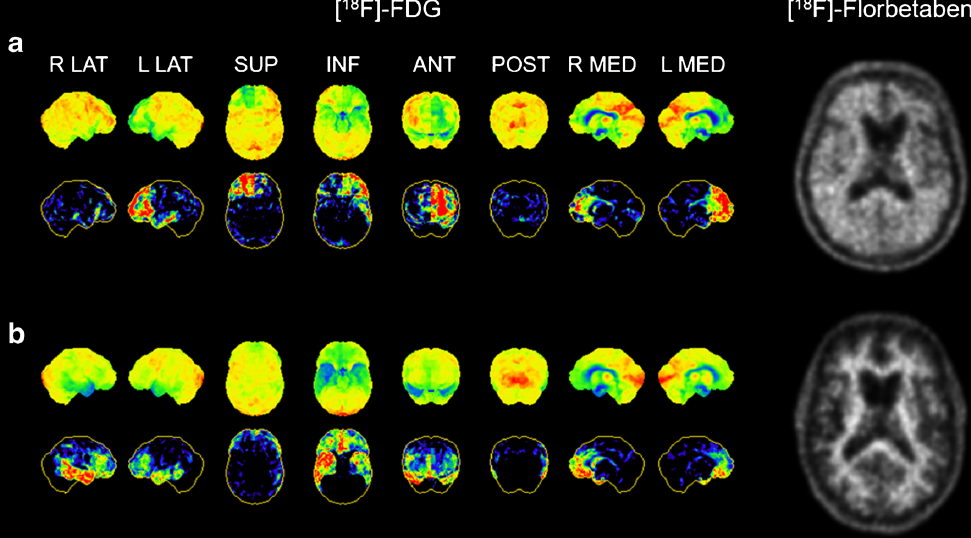 PURPOSE:
In recent years, several [18F]-labeled amyloid-PET tracers have been developed and have obtained clinical approval. Despite their widespread scientific use, studies in routine clinical settings are limited. We therefore investigated the impact of [18F]-florbetaben (FBB)-PET on the diagnostic management of patients with suspected dementia that was still unclarified after [18F]-fluordeoxyglucose (FDG)-PET.

METHODS:
All subjects were referred in-house with a suspected dementia syndrome due to neurodegenerative disease. After undergoing an FDG-PET exam, the cases were discussed by the interdisciplinary dementia board, where the most likely diagnosis as well as potential differential diagnoses were documented. Because of persistent diagnostic uncertainty, the patients received an additional FBB-PET exam. Results were interpreted visually and classified as amyloid-positive or amyloid-negative, and we then compared the individual clinical diagnoses before and after additional FBB-PET.

RESULTS:
A total of 107 patients (mean age 69.4 ± 9.7y) were included in the study. The FBB-PET was rated as amyloid-positive in 65/107. In 83% of the formerly unclear cases, a final diagnosis was reached through FBB-PET, and the most likely prior diagnosis was changed in 28% of cases. The highest impact was observed for distinguishing Alzheimer's dementia (AD) from fronto-temporal dementia (FTLD), where FBB-PET altered the most likely diagnosis in 41% of cases.

CONCLUSIONS:
FBB-PET has a high additive value in establishing a final diagnosis in suspected dementia cases when prior investigations such as FDG-PET are inconclusive. The differentiation between AD and FTLD was particularly facilitated by amyloid-PET, predicting a considerable impact on patient management, especially in the light of upcoming disease-modifying therapies.