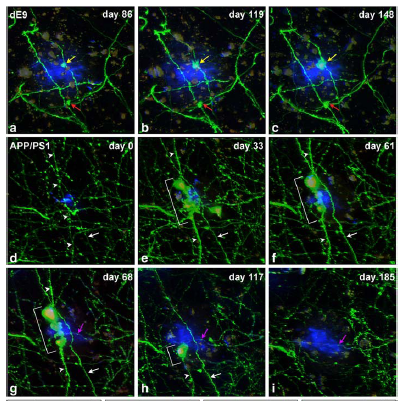 Axonal dystrophies (AxDs) are swollen and tortuous neuronal processes that are associated with extracellular depositions of amyloid β (Aβ) and have been observed to contribute to synaptic alterations occurring in Alzheimer’s disease. Understanding the temporal course of this axonal pathology is of high relevance to comprehend the progression of the disease over time. We performed a long-term in vivo study (up to 210 days of two-photon imaging) with two transgenic mouse models (dE9xGFP-M and APP-PS1xGFP-M). Interestingly, AxDs were formed only in a quarter of GFP-expressing axons near Aβ-plaques, which indicates a selective vulnerability. AxDs, especially those reaching larger sizes, had long lifetimes and appeared as highly plastic structures with large variations in size and shape and axonal sprouting over time. In the case of the APP-PS1 mouse only, the formation of new long axonal segments in dystrophic axons (re-growth phenomenon) was observed. Moreover, new AxDs could appear at the same point of the axon where a previous AxD had been located before disappearance (re-formation phenomenon). In addition, we observed that most AxDs were formed and developed during the imaging period, and numerous AxDs had already disappeared by the end of this time. This work is the first in vivo study analyzing quantitatively the high plasticity of the axonal pathology around Aβ plaques. We hypothesized that a therapeutically early prevention of Aβ plaque formation or their growth might halt disease progression and promote functional axon regeneration and the recovery of neural circuits.