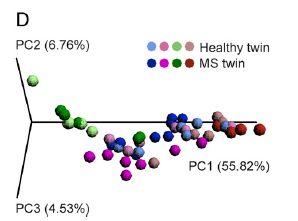 There is emerging evidence that the commensal microbiota has a role in the pathogenesis of multiple sclerosis (MS), a putative autoimmune disease of the CNS. Here, we compared the gut microbial composition of 34 monozygotic twin pairs discordant for MS. While there were no major differences in the overall microbial profiles, we found a significant increase in some taxa such as Akkermansia in untreated MS twins. Furthermore, most notably, when transplanted to a transgenic mouse model of spontaneous brain autoimmunity, MS twin-derived microbiota induced a significantly higher incidence of autoimmunity than the healthy twin-derived microbiota. The microbial profiles of the colonized mice showed a high intraindividual and remarkable temporal stability with several differences, including Sutterella, an organism shown to induce a protective immunoregulatory profile in vitro. Immune cells from mouse recipients of MS-twin samples produced less IL-10 than immune cells from mice colonized with healthy-twin samples. IL-10 may have a regulatory role in spontaneous CNS autoimmunity, as neutralization of the cytokine in mice colonized with healthy-twin fecal samples increased disease incidence. These findings provide evidence that MS-derived microbiota contain factors that precipitate an MS-like autoimmune disease in a transgenic mouse model. They hence encourage the detailed search for protective and pathogenic microbial components in human MS.