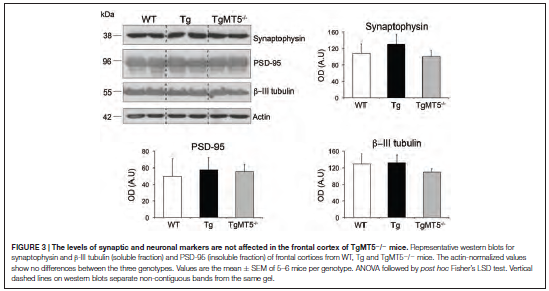 We previously reported that deficiency of membrane-type five matrix metalloproteinase (MT5-MMP) prevents amyloid pathology in the cortex and hippocampus of 5xFAD mice, and ameliorates the functional outcome. We have now investigated whether the integrity of another important area affected in Alzheimer’s disease (AD), the frontal cortex, was also preserved upon MT5-MMP deficiency in 4-month old mice at prodromal stages of the pathology. We used the olfactory H-maze (OHM) to show that learning impairment associated with dysfunctions of the frontal cortex in 5xFAD was prevented in bigenic 5xFAD/MT5-MMP-/-mice. The latter exhibited concomitant drastic reductions of amyloid beta peptide (Ab) assemblies (soluble, oligomeric and fibrillary) and its immediate precursor, C99. Simultaneously, astrocyte reactivity and tumor necrosis factor alpha (TNF-a) levels were also lowered. Moreover, MT5-MMP deficiency induced a decrease in N-terminal soluble fragments of amyloid precursor protein (APP), including soluble APPa (sAPPa), sAPPb and the MT5-MMP-linked fragment of 95 kDa, sAPP95. However, the lack of MT5-MMP did not affect the activity of b- and g-secretases. In cultured HEKswe cells, transiently expressed MT5-MMP localized to early endosomes and increased the content of APP and Ab40 in these organelles, as well as Ab levels in cell supernatants. This is the first evidence that the pro-amyloidogenic features of MT5-MMP lie, at least in part, on the ability of the proteinase to promote trafficking into one of the amyloidogenic subcellular loci. Together, our data further support the pathogenic role of MT5-MMP in AD and that its inhibition improves the functional and pathological outcomes, in this case in the frontal cortex. These data also support the idea that MT5-MMP could become a novel therapeutic target in AD.