Dissecting the interaction between tissue inhibitor of metalloproteinases-3 (TIMP-3) and low density lipoprotein receptor-related protein-1 (LRP-1): Development of a "TRAP" to increase levels of TIMP-3 in the tissue. 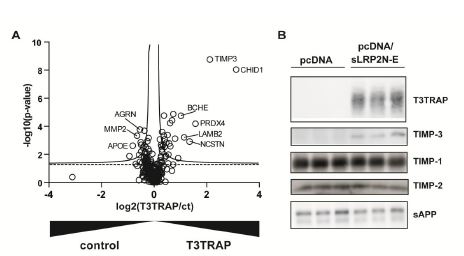 Tissue inhibitor of metalloproteinases 3 (TIMP-3) is a key regulator of extracellular matrix turnover for its ability to inhibit matrix metalloproteinases (MMPs), adamalysin-like metalloproteinases (ADAMs) and ADAMs with thrombospondin motifs (ADAMTSs). TIMP-3 is a secreted protein whose extracellular levels are regulated by endocytosis via the lowdensity- lipoprotein receptor-related protein-1 (LRP-1). In this study we developed a molecule able to “trap” TIMP-3 extracellularly, thereby increasing its tissue bioavailability. LRP-1 contains four ligand-binding clusters. In order to investigate the TIMP-3 binding site on LRP- 1, we generated soluble minireceptors (sLRPs) containing the four distinct binding clusters or part of each cluster. We used an array of biochemical methods to investigate the bindingof TIMP-3 to different sLRPs. We found that TIMP-3 binds to the ligand-binding cluster II of the receptor with the highest affinity and a soluble minireceptor containing the N-terminal half of cluster II specifically blocked TIMP-3 internalization, without affecting the turnover of metalloproteinases. Mass spectrometry-based secretome analysis showed that this minireceptor, named T3TRAP, selectively increased TIMP-3 levels in the extracellular space and inhibited constitutive shedding of a number of cell surface proteins. In conclusion, T3TRAP represents a biological tool that can be used to modulate TIMP-3 levels in the tissue and could be potentially developed as a therapy for diseases characterized by a deficit of TIMP-3, including arthritis.