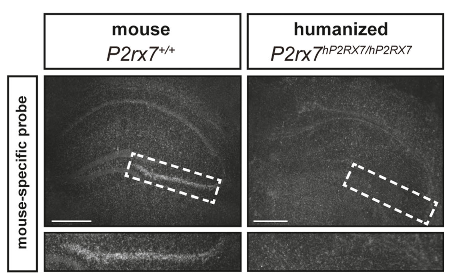 The purinergic P2X7 receptor (P2X7R) has attracted considerable interest as a potential target for various central nervous system (CNS) pathologies including affective and neurodegenerative disorders. To date, the distribution and cellular localization of the P2X7R in the brain are not fully resolved and a matter of debate mainly due to the limitations of existing tools. However, this knowledge should be a prerequisite for understanding the contribution of the P2X7R to brain disease. Here, we generated a genetic mouse model by humanizing the P2X7R in the mouse as mammalian model organism. We demonstrated its functionality and revealed species-specific characteristics of the humanized receptor, compared to the murine ortholog, regarding its receptivity to activation and modulation by 2′,3′-O-(benzoyl-4-benzoyl)-adenosine 5′-triphosphate (BzATP) and trifluoperazine (TFP). This humanized P2rx7 allele is accessible to spatially and temporally controlled Cre recombinase-mediated inactivation. In contrast to previously generated knockout (KO) mice, none of the described P2rx7 splice variants evade this null allele. By selective disruption and assessment of human P2RX7 expression in different brain regions and cell types, we were able to demonstrate that the P2X7R is specifically expressed in glutamatergic pyramidal neurons of the hippocampus. Also, P2X7R is expressed in major non-neuronal lineages throughout the brain, i.e., astrocytes, oligodendrocytes, and microglia. In conclusion, this humanized mouse model provides the means for detailed assessment of human P2X7R function in vivo including evaluation of agonists or antagonists. In addition, this conditional allele will enable future loss-of-function studies in conjunction with mouse models for CNS disorders.