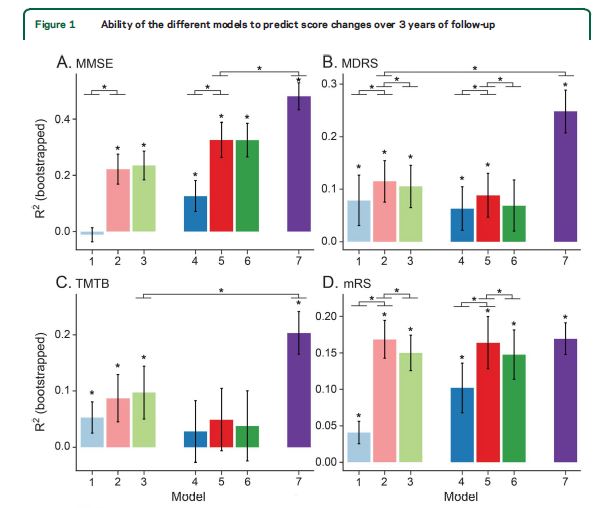 Objective:
To obtain simple models predicting disease evolution at 3 years for a given patient with cerebral autosomal dominant arteriopathy with subcortical infarcts and leukoencephalopathy (CADASIL).

Methods:
Based on data obtained in a prospective study of 236 patients, we built and validated models predicting, at the individual level, 3-year changes in Mini-Mental State Examination (MMSE), Mattis Dementia Rating Scale (MDRS), Trail Making Test version B (TMTB), and modified Rankin Scale (mRS). These models were based on different sets of predictors obtained at baseline, including either clinical data (epidemiologic data and cardiovascular risk factors) or clinical data and quantitative MRI markers (volume of lacunes [LLV], volume of white matter hyperintensities, normalized brain volume [BPF], number of microbleeds). The Bayesian information criterion (BIC) and the coefficient of determination (R2) were used to determine models with the highest predictive ability and the lowest numbers of predictors.

Results:
We obtained validated models with a demonstrated ability to predict, for a given patient, 3-year changes in MMSE, MDRS, TMTB, and mRS (R2 on independent samples: 0.22, 0.12, 0.09, and 0.17, respectively). In all cases, the best models according to R2 and BIC values included only the baseline values of the outcome, of BPF, and of LLV. Inclusion of other potential predictors always led to a loss of generalizability.

Conclusions:
The prediction of 3-year changes in MMSE, MDRS, TMTB, and mRS for a given patient with CADASIL can be obtained using simple models relying only on the initial values of the considered score, BPF, and LLV.