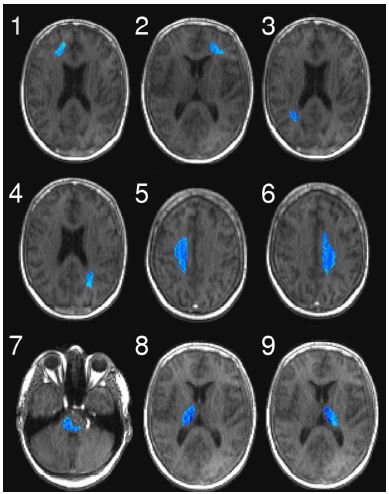 Objectives: Multiple sclerosis (MS) is a chronic, inflammatory disease of the central nervous system and has been associated with reduced perfusion in normal-appearing white matter (NAWM). The magnitude of this hypoperfusion is unclear. The present study aims to quantify NAWM perfusion with dynamic contrast-enhanced (DCE) magnetic resonance imaging (MRI) in patients with relapsing-remitting (RR) MS and in a control group.

Materials and Methods: The statistical power of a DCE-MRI acquisition to reveal hypoperfusion in MS was estimated using a Monte Carlo simulation: synthetic tissue curves with a contrast-to-noise ratio of 8 were generated for MS patients and control group using perfusion values reported in previous studies. A compartment-uptake model was fitted to these curves, yielding estimates of cerebral blood flow (CBF), cerebral blood volume (CBV), and permeability-surface area product (PS). This was repeated 1000 times. Mean and standard deviation of the resulting distributions were used to calculate the statistical power of a DCE-MRI study to detect perfusion differences between 16 control subjects and 24 MS subjects.

Parameter differences between MS and control groups were evaluated using a mixed linear model with subjects as random effect and controlling for age and sex. A P value of less than 0.05was considered to indicate statistical significance.

Conclusions: Despite high statistical power, we could not confirm previous reports of NAWM hypoperfusion in MS. This indicates that, at least in our patient cohort, potential hypoperfusion is much less pronounced than reported in previous studies.