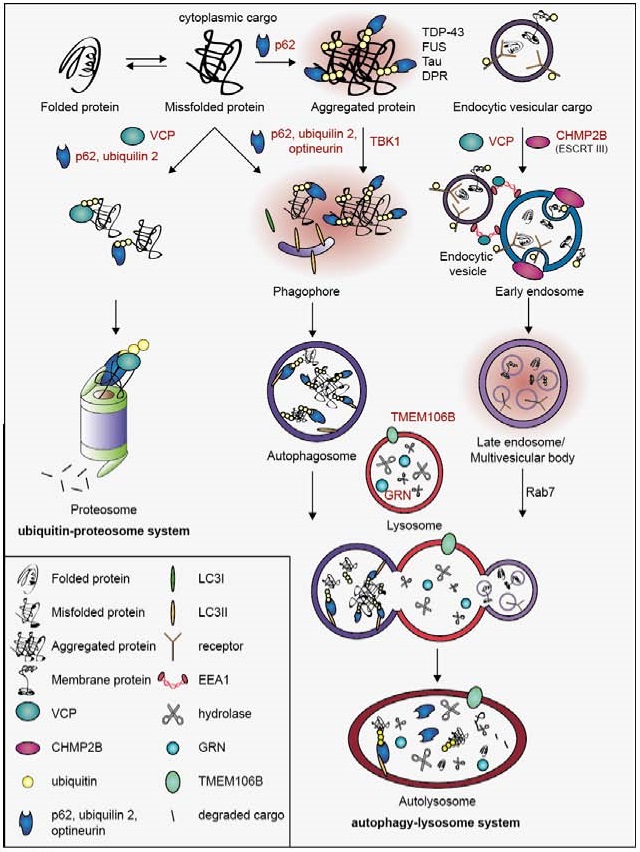 Impaired protein degradation has been discussed as a cause or consequence of various neurodegenerative diseases, such as Alzheimer’s, Parkinson’s and Huntington’s disease. More recently, evidence accumulated that dysfunctional protein degradation may play a role in frontotemporal dementia (FTD) and amyotrophic lateral sclerosis (ALS). Since in almost all neurodegenerative diseases, protein aggregates are disease-defining hallmarks, it is most likely that impaired protein degradation contributes to disease onset and progression. In the
majority of FTD cases, the pathological protein aggregates contain either microtubuleassociated protein tau or TAR DNA-binding protein (TDP)-43. Aggregates are also positive for ubiquitin and p62/sequestosome 1 (SQSTM1) indicating that these aggregates are targeted for degradation. FTD-linked mutations in genes encoding three autophagy adaptor proteins, p62/SQSTM1, ubiquilin 2 and optineurin, indicate that impaired autophagy might cause FTD. Furthermore, the strongest evidence for lysosomal impairment in FTD is provided by the progranulin (GRN) gene, which is linked to FTD and neuronal ceroid lipofuscinosis.

In this review, we summarize the observations that have been made during the last years linking the accumulation of disease-associated proteins in FTD to impaired protein degradation pathways. In addition, we take resent findings for nucleocytoplasmic transport defects of TDP-43, as discussed for hexanucleotide repeat expansions in C9orf72 into account and provide a hypothesis how the interplay of altered nuclear transport and protein degradation leads to the accumulation of protein deposits.