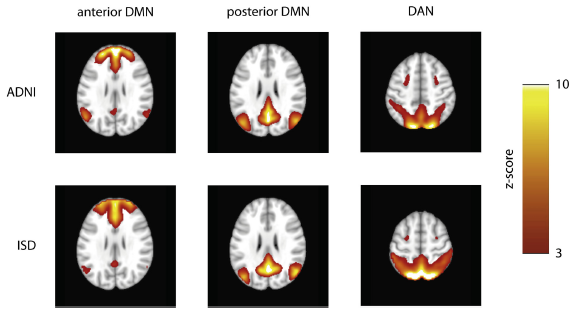 Cognitive reserve (CR) shows protective effects on cognitive function in older adults. Here, we focused on the effects of CR at the functional network level. We assessed in patients with amnestic mild cognitive impairment (aMCI) whether higher CR moderates the association between low internetwork cross-talk on memory performance. In 2 independent aMCI samples (n = 76 and 93) and healthy controls (HC, n = 36), CR was assessed via years of education and intelligence (IQ). We focused on the anti-correlation between the dorsal attention network (DAN) and an anterior and posterior default mode network (DMN), assessed via sliding time window analysis of resting-state functional magnetic resonance imaging (fMRI). The DMN-DAN anti-correlation was numerically but not significantly lower in aMCI compared to HC. However, in aMCI, lower anterior DMN-DAN anti-correlation was associated with lower memory performance. This association was moderated by CR proxies, where the association between the internetwork anti-correlation and memory performance was alleviated at higher levels of education or IQ. In conclusion, lower DAN-DMN cross-talk is associated with lower memory in aMCI, where such effects are buffered by higher CR.