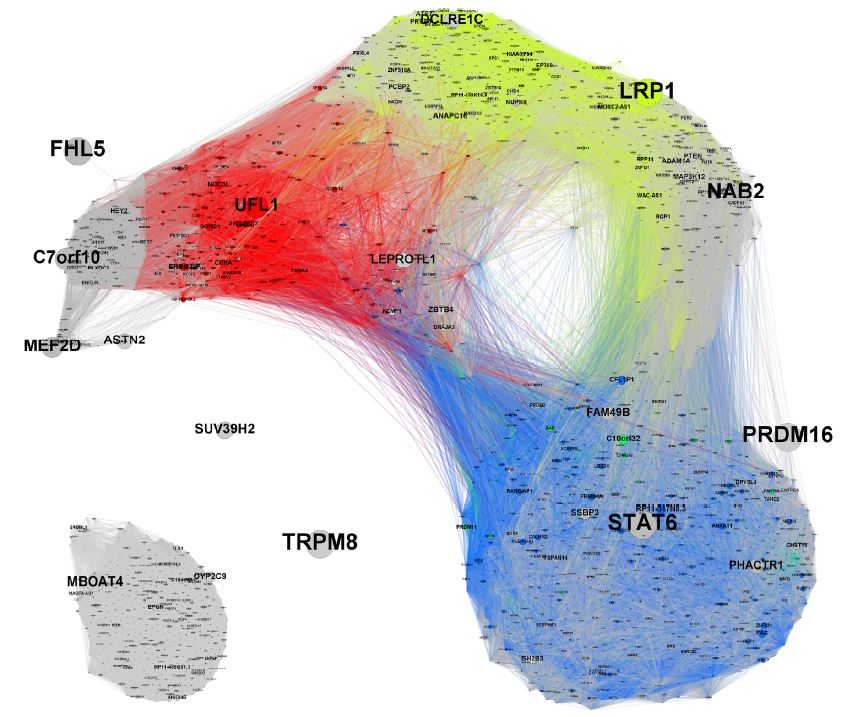 Migraine is a common disabling neurovascular brain disorder typically characterised by attacks of severe headache and associated with autonomic and neurological symptoms. Migraine is caused by an interplay of genetic and environmental factors. Genome-wide association studies (GWAS) have identified over a dozen genetic loci associated with migraine. Here, we integrated migraine GWAS data with high-resolution spatial gene expression data of normal adult brains from the Allen Human Brain Atlas to identify specific brain regions and molecular pathways that are possibly involved in migraine pathophysiology. To this end, we used two complementary methods. In GWAS data from 23,285 migraine cases and 95,425 controls, we first studied modules of co-expressed genes that were calculated based on human brain expression data for enrichment of genes that showed association with migraine. Enrichment of a migraine GWAS signal was found for five modules that suggest involvement in migraine pathophysiology of: (i) neurotransmission, protein catabolism and mitochondria in the cortex; (ii) transcription regulation in the cortex and cerebellum; and (iii) oligodendrocytes and mitochondria in subcortical areas. Second, we used the high-confidence genes from the migraine GWAS as a basis to construct local migraine-related co-expression gene networks. Signatures of all brain regions and pathways that were prominent in the first method also surfaced in the second method, thus providing support that these brain regions and pathways are indeed involved in migraine pathophysiology.