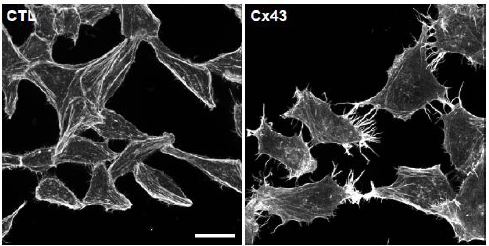 In a previous study we could show that connexin 43 (Cx43) expression increased the migration of cells in a channel-independent manner involving the MAPK p38. We analyzed here the mechanism by which Cx43 enhanced p38 activation and migration related changes of the actin cytoskeleton. HeLa cells were used as a model system for the controlled expression of Cx43 and truncated Cx43 proteins. The expression of Cx43 altered the actin cytoskeleton organization in response to serum stimulation. Cx43 expressing HeLa cells had significantly more filopodial protrusions per cell than empty-vector transfected control cells. The expression of the channel incompetent carboxyl tail of Cx43 was sufficient to enhance the filopodia formation whereas the N-terminal, channel-building part, had no such effect. The enhanced filopodia formation was p38 dependent since the p38 blocker SB203580 significantly diminished it. Immunoprecipitation revealed an interaction of the upstream regulator of p38, p21-activated protein kinase 1 (PAK1), with Cx43 resulting in an enhanced phosphorylation of PAK1. Moreover, p38 activation, filopodia formation and cell migration were significantly reduced by blocking the PAK1 activity with its pharmacological inhibitor, IPA-3. The p38 target Hsp27, which favors the actin polymerization in its phosphorylated form, was significantly more phosphorylated characterizing it as a potential candidate molecule to enhance the serum-induced actin polymerization in Cx43 expressing cells. Our results provide a novel mechanism by which Cx43 can modify actin cytoskeletal dynamics and may thereby enhance cell migration.