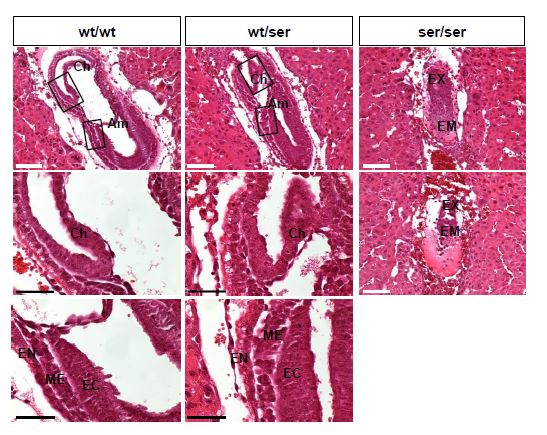 The selenoenzyme Gpx4 is essential for early embryogenesis and cell viability for its unique function to prevent phospholipid oxidation. Recently, the cytosolic form of Gpx4 was identified as an upstream regulator of a novel form of non-apoptotic cell death, called ferroptosis, whereas the mitochondrial isoform of Gpx4 (mGpx4) was previously shown to be crucial for male fertility. Here, we generated and analyzed mice with targeted mutation of the active site selenocysteine (Sec) of Gpx4 (Gpx4_U46S). Mice homozygous for Gpx4_U46S died at the same embryonic stage (E7.5) as Gpx4-/- embryos as expected. Surprisingly, male mice heterozygous for Gpx4_U46S presented subfertility. Subfertility was manifested in a reduced number of litters from heterozygous breedings and an impairment of spermatozoa to fertilize oocytes in vitro. Morphologically, sperm isolated from heterozygous Gpx4_U46S mice revealed many structural abnormalities particularly in the spermatozoan midpiece due to improper oxidation and polymerization of sperm capsular proteins and malformation of the mitochondrial capsule surrounding and stabilizing sperm mitochondria. These findings are reminiscent of sperm isolated from selenium-deprived rodents or from mice specifically lacking mGpx4. Due to a strongly facilitated incorporation of Ser in the polypeptide chain as compared to Sec at the UGA codon, expression of the catalytically inactive Gpx4_U46S was found to be strongly increased. Since the stability of the mitochondrial capsule of mature spermatozoa depends on the moonlighting function of Gpx4 both as an enzyme oxidizing capsular protein thiols and being a structural protein, tightly controlled expression of functional Gpx4 emerges being key for full male fertility.