Dilated Perivascular Spaces in Small-Vessel Disease: A Study in CADASIL 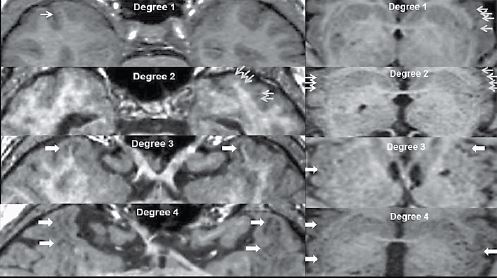 Background and Aim: Dilated perivascular spaces (dPVS) have previously been associated with aging and hypertension-related cerebral microangiopathy. However, their risk factors, radiological features and clinical relevance have been poorly evaluated in CADASIL (cerebral autosomal-dominant arteriopathy with subcortical infarcts and leukoencephalopathy), a unique model to investigate the pathophysiology of ischemic small-vessel disease. The purpose of this study was to investigate these different aspects in a large cohort of patients with this disorder. Methods: Demographic and MRI data of 344 patients from a prospective cohort study were analyzed. The severity of dPVS was evaluated separately in the anterior temporal lobes, subinsular areas, basal ganglia and white matter, using validated semiquantitative scales. Logistic and multiple linear regression models were used to determine the risk factors associated with the severity of dPVS in these different regions and their relationships with cognition, disability and the MRI markers of the disease (white matter hyperintensities (WMH) lacunar infarcts, microbleeds and brain parenchymal fraction (BPF)). Results: The severity of dPVS was found to increase with age regardless of cerebral area (p < 0.001). In contrast with dPVS in other locations, the severity of dPVS in the temporal lobes or subinsular areas was also found strongly and specifically related to the extent of WMH (p < 0.001). Conversely, no significant association was detected with lacunar volume, number of microbleeds or BPF. A high degree of dPVS in the white matter was associated with lower cognitive performances independently of age and other MRI markers of the disease including BPF (p ≤ 0.04). Conclusions: In CADASIL, the progression of the hereditary microangiopathy with aging may promote the dilation of perivascular spaces throughout the whole brain but with variable extent according to cerebral location. In temporal lobes and subinsular areas, dPVS are common MRI features and may share a similar pathogenesis with the extension of WMH during the course of the disease. dPVS may also participate in the development of cognitive decline in this model of small-vessel disease, and their large number in white matter may alert clinicians to a higher risk of cognitive decline in CADASIL.