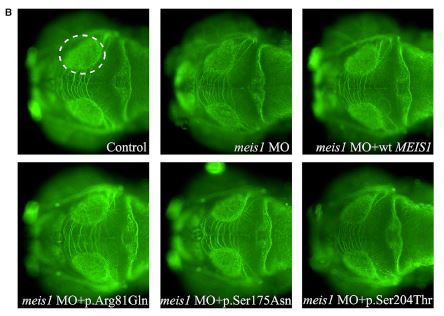 Restless legs syndrome (RLS) is a common neurologic condition characterized by nocturnal dysesthesias and an urge to move, affecting the legs. RLS is a complex trait, for which genome-wide association studies (GWASs) have identified common susceptibility alleles of modest (OR 1.2-1.7) risk at six genomic loci. Among these, variants in MEIS1 have emerged as the largest risk factors for RLS, suggesting that perturbations in this transcription factor might be causally related to RLS susceptibility. To establish this causality, direction of effect, and total genetic burden of MEIS1, we interrogated 188 case subjects and 182 control subjects for rare alleles not captured by previous GWASs, followed by genotyping of ∼3,000 case subjects and 3,000 control subjects, and concluded with systematic functionalization of all discovered variants using a previously established in vivo model of neurogenesis. We observed a significant excess of rare MEIS1 variants in individuals with RLS. Subsequent assessment of all nonsynonymous variants by in vivo complementation revealed an excess of loss-of-function alleles in individuals with RLS. Strikingly, these alleles compromised the function of the canonical MEIS1 splice isoform but were irrelevant to an isoform known to utilize an alternative 3' sequence. Our data link MEIS1 loss of function to the etiopathology of RLS, highlight how combined sequencing and systematic functional annotation of rare variation at GWAS loci can detect risk burden, and offer a plausible explanation for the specificity of phenotypic expressivity of loss-of-function alleles at a locus broadly necessary for neurogenesis and neurodevelopment.