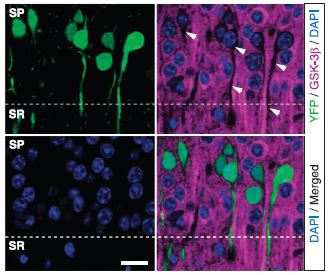 Central nervous glycogen synthase kinase 3β (GSK3β) is implicated in a number of neuropsychiatric diseases, such as bipolar disorder, depression, schizophrenia, fragile X syndrome or anxiety disorder. Many drugs employed to treat these conditions inhibit GSK3β either directly or indirectly. We studied how conditional knockout of GSK3β affected structural synaptic plasticity. Deletion of the GSK3β gene in a subset of cortical and hippocampal neurons in adult mice led to reduced spine density. In vivo imaging revealed that this was caused by a loss of persistent spines, whereas stabilization of newly formed spines was reduced. In electrophysiological recordings, these structural alterations correlated with a considerable drop in the frequency and amplitude of α-amino-3-hydroxy-5-methyl-4-isoxazolepropionic acid (AMPA) receptor-dependent miniature excitatory postsynaptic currents. Expression of constitutively active β-catenin caused reduction in spine density and electrophysiological alterations similar to GSK3β knockout, suggesting that the effects of GSK3β knockout were mediated by the accumulation of β-catenin. In summary, changes of dendritic spines, both in quantity and in morphology, are correlates of experience-dependent synaptic plasticity; thus, these results may help explain the mechanism of action of psychotropic drugs inhibiting GSK3β.