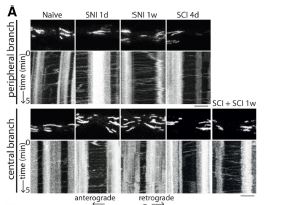 Despite the inability of CNS axons to regenerate, an increased regenerative capacity can be elicited following conditioning lesion to the peripheral branch of dorsal root ganglia neurons (DRGs). By in vivo radiolabeling of rat DRGs, coupled to mass spectrometry and kinesin immunoprecipitation of spinal cord extracts, we determined that the anterograde transport of cytoskeleton components, metabolic enzymes and axonal regeneration enhancers, was increased in the central branch of DRGs following a peripheral conditioning lesion. Axonal transport of mitochondria was also increased in the central branch of Thy1-MitoCFP mice following a peripheral injury. This effect was generalized and included augmented transport of lysosomes and synaptophysin- and APP-carrying vesicles. Changes in axonal transport were only elicited by a peripheral lesion and not by spinal cord injury. In mice, elevated levels of motors and of polyglutamylated and tyrosinated tubulin were present following a peripheral lesion and can explain the increase in axonal transport induced by conditioning. In summary, our work shows that a peripheral injury induces a global increase in axonal transport that is not restricted to the peripheral branch, and that, by extending to the central branch, allows a rapid and sustained support of regenerating central axons.