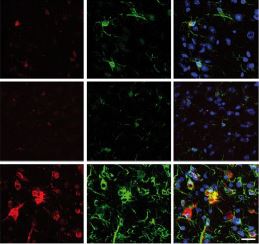 Heterozygous loss-of-function mutations in the progranulin (GRN) gene and the resulting reduction of GRN levels is a common genetic cause for frontotemporal lobar degeneration (FTLD) with accumulation of TAR DNA-binding protein (TDP)-43. Recently, it has been shown that a complete GRN deficiency due to a homozygous GRN loss-of-function mutation causes neuronal ceroid lipofuscinosis (NCL), a lysosomal storage disorder. These findings suggest that lysosomal dysfunction may also contribute to some extent to FTLD. Indeed, Grn(-/-) mice recapitulate not only pathobiochemical features of GRN-associated FTLD-TDP (FTLD-TDP/GRN), but also those which are characteristic for NCL and lysosomal impairment. In Grn(-/-) mice the lysosomal proteins cathepsin D (CTSD), LAMP (lysosomal-associated membrane protein) 1 and the NCL storage components saposin D and subunit c of mitochondrial ATP synthase (SCMAS) were all found to be elevated. Moreover, these mice display increased levels of transmembrane protein (TMEM) 106B, a lysosomal protein known as a risk factor for FTLD-TDP pathology. In line with a potential pathological overlap of FTLD and NCL, Ctsd(-/-) mice, a model for NCL, show elevated levels of the FTLD-associated proteins GRN and TMEM106B. In addition, pathologically phosphorylated TDP-43 occurs in Ctsd(-/-) mice to a similar extent as in Grn(-/-) mice. Consistent with these findings, some NCL patients accumulate pathologically phosphorylated TDP-43 within their brains. Based on these observations, we searched for pathological marker proteins, which are characteristic for NCL or lysosomal impairment in brains of FTLD-TDP/GRN patients. Strikingly, saposin D, SCMAS as well as the lysosomal proteins CTSD and LAMP1/2 are all elevated in patients with FTLD-TDP/GRN. Thus, our findings suggest that lysosomal storage disorders and GRN-associated FTLD may share common features.