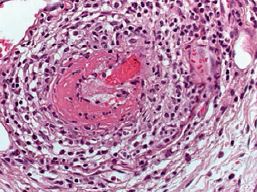 Background Polyarteritis nodosa is a systemic necrotizing vasculitis with a pathogenesis that is poorly understood. We identified six families with multiple cases of systemic and cutaneous polyarteritis nodosa, consistent with autosomal recessive inheritance. In most cases, onset of the disease occurred during childhood. Methods We carried out exome sequencing in persons from multiply affected families of Georgian Jewish or German ancestry. We performed targeted sequencing in additional family members and in unrelated affected persons, 3 of Georgian Jewish ancestry and 14 of Turkish ancestry. Mutations were assessed by testing their effect on enzymatic activity in serum specimens from patients, analysis of protein structure, expression in mammalian cells, and biophysical analysis of purified protein. Results In all the families, vasculitis was caused by recessive mutations in CECR1, the gene encoding adenosine deaminase 2 (ADA2). All the Georgian Jewish patients were homozygous for a mutation encoding a Gly47Arg substitution, The German patients were compound heterozygous for Arg169Gln and Pro251Leu mutations, and one Turkish patient was compound heterozygous for Gly47Val and Trp264Ser mutations. In the endogamous Georgian Jewish population, the Gly47Arg carrier frequency was 0.102, which is consistent with the high prevalence of disease. The other mutations either were found in only one family member or patient or were extremely rare. ADA2 activity was significantly reduced in serum specimens from patients. Expression in human embryonic kidney 293T cells revealed low amounts of mutant secreted protein. Conclusions Recessive loss-of-function mutations of ADA2, a growth factor that is the major extracellular adenosine deaminase, can cause polyarteritis nodosa vasculopathy with highly varied clinical expression. (Funded by the Shaare Zedek Medical Center and others.).