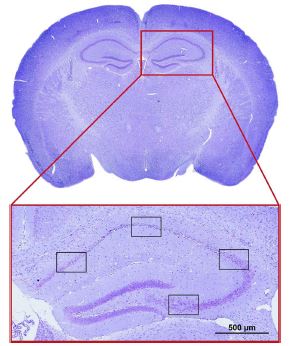 Genetically engineered mice are a valuable tool to investigate the molecular and cellular mechanisms leading to brain damage following subarachnoid hemorrhage (SAH). Therefore, several murine SAH models were developed during the last 15 years. Among those models, the perforation of the Circle of Willis by an endovascular filament or "filament model" turned out to become the most popular one, since it is believed to reproduce some of the most prominent pathophysiological features observed after human SAH. Despite the importance of the endovascular filament model for SAH research, relatively few studies were published using this technique during the past years and a number of laboratories reported problems establishing the technique. This triggered discussions about the standardization, reproducibility, and the reliability of the model. In order to improve this situation, the current paper aims to provide a comprehensive hands-on protocol of the murine endovascular filament model. The protocol proved to result in induction of SAH in mice with high intrapersonal and interpersonal reproducibility and is based on our experience with this technique for more than 10 years. By sharing our experience with this valuable model, we aim to initiate a constantly ongoing discussion process on the improvement of standards and techniques in the field of experimental SAH research.