Towards a concept of disorders of "higher vestibular function" 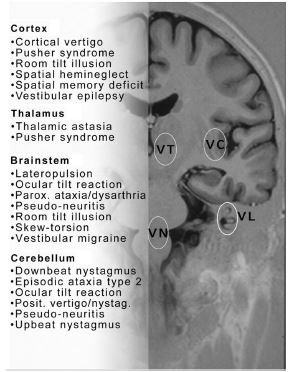 Background: Vestibular disorders are commonly characterized by a combination of perceptual, ocular motor, postural, and vegetative manifestations, which cause the symptoms of vertigo, nystagmus, ataxia, and nausea. Multisensory convergence and numerous polysynaptic pathways link the bilaterally organized central vestibular network with limbic, hippocampal, cerebellar, and non-vestibular cortex structures to mediate "higher" cognitive functions. Anatomical classification of vestibular disorders: The traditional classification of vestibular disorders is based on the anatomical site of the lesion. While it distinguishes between the peripheral and the central vestibular systems, certain weaknesses become apparent when applied clinically. There are two reasons for this: first, peripheral and central vestibular disorders cannot always be separated by the clinical syndrome; second, a third category, namely disorders of "higher vestibular function", is missing. These disorders may be caused by peripheral as well as central vestibular lesions. Functional classification: Here we discuss a new concept of disorders of higher vestibular function which involve cognition and more than one sensory modality. Three conditions are described that exemplify such higher disorders: room tilt illusion, spatial hemineglect, and bilateral vestibulopathy all of which present with deficits of orientation and spatial memory. Conclusions: Further elaboration of such disorders of higher multisensory functions with respect to lesion site and symptomatology is desirable. The room tilt illusion and spatial hemineglect involve vestibular and visual function to the extent that both conditions can be classified as either disorders of higher vestibular or of higher visual functions. A possible way of separating these disorders in a first step is to determine whether the causative lesion site affects the vestibular or the visual system. For the vestibular system this lesion site may be peripheral or central. The criterion of "higher function" is fulfilled if cognition or senses other than the primarily affected one come into play.