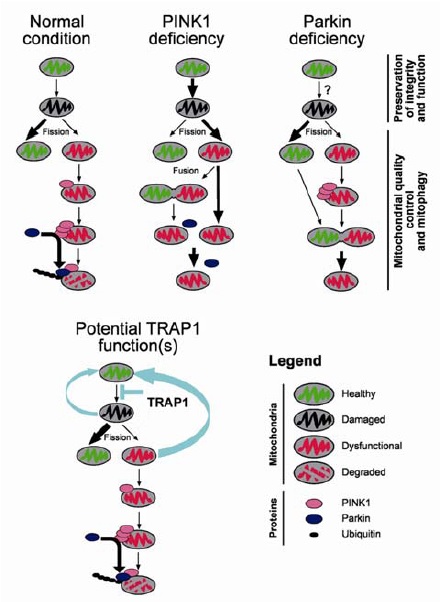 PTEN-induced kinase 1 (PINK1) is a serine/threonine kinase that is localized to mitochondria. It protects cells from oxidative stress by suppressing mitochondrial cytochrome c release, thereby preventing cell death. Mutations in Pink1 cause early-onset Parkinson's disease (PD). Consistently, mitochondrial function is impaired in Pink1-linked PD patients and model systems. Previously, in vitro analysis implied that the protective effects of PINK1 depend on phosphorylation of the downstream factor, TNF receptor-associated protein 1 (TRAP1). Furthermore, TRAP1 has been shown to mitigate α-Synuclein-induced toxicity, linking α-Synuclein directly to mitochondrial dysfunction. These data suggest that TRAP1 seems to mediate protective effects on mitochondrial function in pathways that are affected in PD. Here we investigated the potential of TRAP1 to rescue dysfunction induced by either PINK1 or Parkin deficiency in vivo and in vitro. We show that overexpression of human TRAP1 is able to mitigate Pink1 but not parkin loss-of-function phenotypes in Drosophila. In addition, detrimental effects observed after RNAi-mediated silencing of complex I subunits were rescued by TRAP1 in Drosophila. Moreover, TRAP1 was able to rescue mitochondrial fragmentation and dysfunction upon siRNA-induced silencing of Pink1 but not parkin in human neuronal SH-SY5Y cells. Thus, our data suggest a functional role of TRAP1 in maintaining mitochondrial integrity downstream of PINK1 and complex I deficits but parallel to or upstream of Parkin.