FUS-mediated alternative splicing in the nervous system: consequences for ALS and FTLD 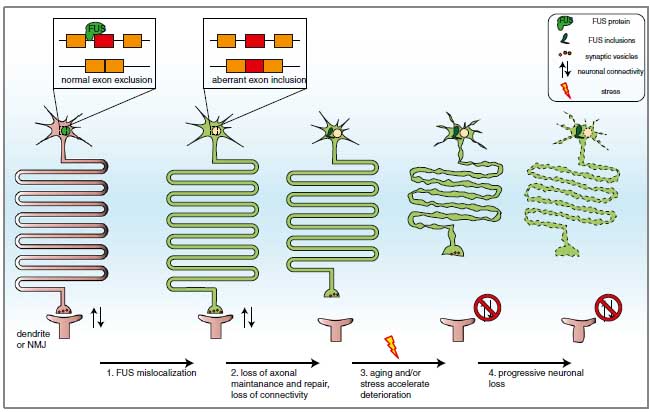 Mutations in fused in sarcoma (FUS) in a subset of patients with amyotrophic lateral sclerosis (ALS) linked this DNA/RNA-binding protein to neurodegeneration. Most of the mutations disrupt the nuclear localization signal which strongly suggests a loss-of-function pathomechanism, supported by cytoplasmic inclusions. FUS-positive neuronal cytoplasmic inclusions are also found in a subset of patients with frontotemporal lobar degeneration (FTLD). Here, we discuss recent data on the role of alternative splicing in FUS-mediated pathology in the central nervous system. Several groups have shown that FUS binds broadly to many transcripts in the brain and have also identified a plethora of putative splice targets; however, only ABLIM1, BRAF, Ewing sarcoma protein R1 (EWSR1), microtubule-associated protein tau (MAPT), NgCAM cell adhesion molecule (NRCAM), and netrin G1 (NTNG1) have been identified in at least three of four studies. Gene ontology analysis of all putative targets unanimously suggests a role in axon growth and cytoskeletal organization, consistent with the altered morphology of dendritic spines and axonal growth cones reported upon loss of FUS. Among the axonal targets, MAPT/tau and NTNG1 have been further validated in biochemical studies. The next challenge will be to confirm changes of FUS-mediated alternative splicing in patients and define their precise role in the pathophysiology of ALS and FTLD.