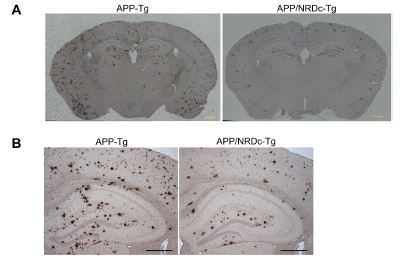 Amyloid beta (Aβ) peptide, the main component of senile plaques in patients with Alzheimer's disease (AD), is derived from proteolytic cleavage of amyloid precursor protein (APP) by β- and γ-secretases. Alpha-cleavage of APP by α-secretase has a potential to preclude the generation of Aβ because it occurs within the Aβ domain. We previously reported that a metalloendopeptidase, nardilysin (N-arginine dibasic convertase; NRDc) enhances α-cleavage of APP, which results in the decreased generation of Aβ in vitro. To clarify the in vivo role of NRDc in AD, we intercrossed transgenic mice expressing NRDc in the forebrain with an AD mouse model. Here we demonstrate that the neuron-specific overexpression of NRDc prevents Aβ deposition in the AD mouse model. The activity of α-secretase in the mouse brain was enhanced by the overexpression of NRDc, and was reduced by the deletion of NRDc. However, reactive gliosis adjacent to the Aβ plaques, one of the pathological features of AD, was not affected by the overexpression of NRDc. Taken together, our results indicate that NRDc controls Aβ formation through the regulation of α-secretase.