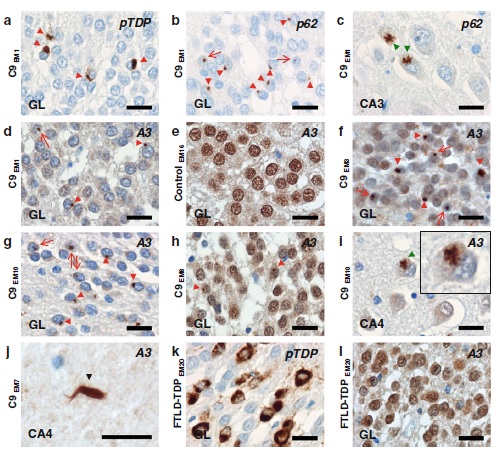 Genetic analysis revealed the hexanucleotide repeat expansion GGGGCC within the regulatory region of the gene C9orf72 as the most common cause of familial amyotrophic lateral sclerosis and the second most common cause of frontotemporal lobar degeneration. Since repeat expansions might cause RNA toxicity via sequestration of RNA-binding proteins, we searched for proteins capable of binding to GGGGCC repeats. In vitro-transcribed biotinylated RNA containing hexanucleotide GGGGCC or, as control, AAAACC repeats were incubated with nuclear protein extracts. Using stringent filtering protocols 20 RNA-binding proteins with a variety of different functions in RNA metabolism, translation and transport were identified. A subset of these proteins was further investigated by immunohistochemistry in human autopsy brains. This revealed that hnRNP A3 formed neuronal cytoplasmic and intranuclear inclusions in the hippocampus of patients with C9orf72 repeat extensions. Confocal microcopy showed that these inclusions belong to the group of the so far enigmatic p62-positive/TDP-43 negative inclusions characteristically seen in autopsy cases of diseased C9orf72 repeat expansion carriers. Thus, we have identified one protein component of these pathognomonic inclusions.