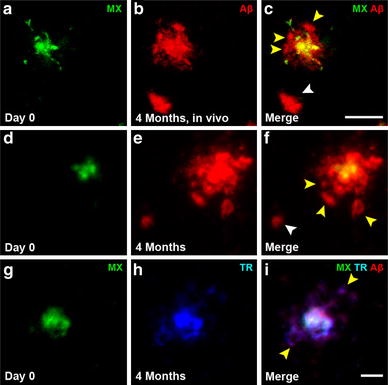 Amyloid-β (Aβ) plaque deposition plays a central role in the pathogenesis of Alzheimer's disease (AD). Post-mortem analysis of plaque development in mouse models of AD revealed that plaques are initially small, but then increase in size and become more numerous with age. There is evidence that plaques can grow uniformly over time; however, a complementary hypothesis of plaque development is that small plaques cluster and grow together thereby forming larger plaques. To investigate the latter hypothesis, we studied plaque formation in APPPS1 mice using in vivo two-photon microscopy and immunohistochemical analysis. We used sequential pre- and post-mortem staining techniques to label plaques at different stages of development and to detect newly emerged plaques. Post-mortem analysis revealed that a subset (22 %) of newly formed plaques appeared very close (<40 μm) to pre-existing plaques and that many close plaques (25 %) that were initially separate merged over time to form one single large plaque. Our results suggest that small plaques can cluster together, thus forming larger plaques as a complementary mechanism to simple uniform plaque growth from a single initial plaque. This study deepens our understanding of Aβ deposition and demonstrates that there are multiple mechanisms at play in plaque development.