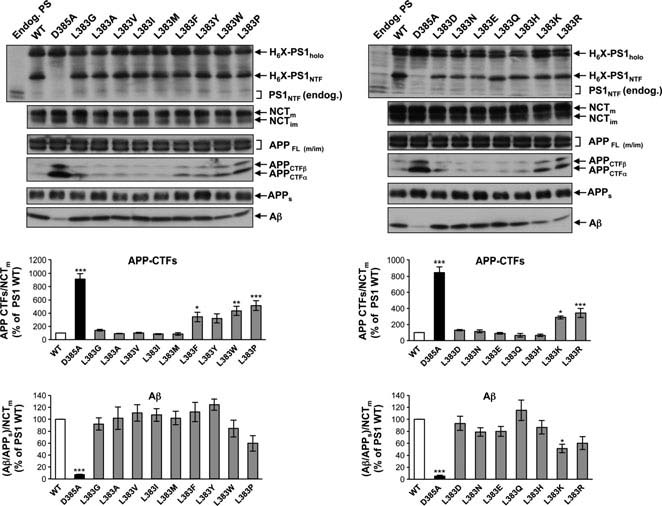 γ-Secretase plays a central role in the generation of the Alzheimer disease-causing amyloid β-peptide (Aβ) from the β-amyloid precursor protein (APP) and is thus a major Alzheimer's disease drug target. As several other γ-secretase substrates including Notch1 and CD44 have crucial signaling functions, an understanding of the mechanism of substrate recognition and cleavage is key for the development of APP selective γ-secretase-targeting drugs. The γ-secretase active site domain in its catalytic subunit presenilin (PS) 1 has been implicated in substrate recognition/docking and cleavage. Highly critical in this process is its GxGD active site motif, whose invariant glycine residues cannot be replaced without causing severe functional losses in substrate selection and/or cleavage efficiency. Here, we have investigated the contribution of the less well characterized residue x of the motif (L383 in PS1) to this function. Extensive mutational analysis showed that processing of APP was overall well-tolerated over a wide range of hydrophobic and hydrophilic mutations. Interestingly, however, most L383 mutants gave rise to reduced levels of Aβ37-39 species, and several increased the pathogenic Aβ42/43 species. Several of the Aβ42/43 -increasing mutants severely impaired the cleavages of Notch1 and CD44 substrates, which were not affected by any other L383 mutation. Our data thus establish an important, but compared with the glycine residues of the motif, overall less critical functional role for L383. We suggest that L383 and the flanking glycine residues form a spatial arrangement in PS1 that is critical for docking and/or cleavage of different γ-secretase substrates.