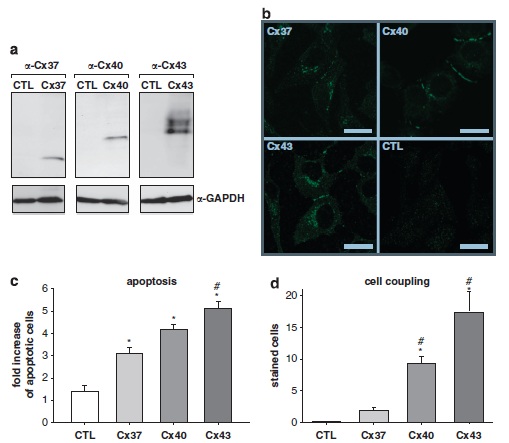 Gap junctions (GJs) have been described to modulate cell death and survival. It still remains unclear whether this effect requires functional GJ channels or depends on channel-independent effects of connexins (Cx), the constituents of GJs. Therefore, we analysed the apoptotic response to streptonigrin (SN, intrinsic apoptotic pathway) or to α-Fas (extrinsic apoptotic pathway) in HeLa cells expressing Cx43 as compared with empty vector-transfected (CTL) cells. Apoptosis assessed by annexin V-fluorescein isothiocyanate/propidium iodide staining was significantly higher in HeLa-Cx43 compared with HeLa-CTL cells. Moreover, the cleavage of caspase-7 or Parp occurred earlier in HeLa-Cx43 than in HeLa-CTL cells. Comparative analysis of the effect of two further (endothelial) Cx (Cx37 and Cx40) on apoptosis revealed that apoptosis was highest in HeLa-Cx43 and lowest in HeLa-Cx37 cells, and correlated with the GJ permeability (assessed by spreading of a GJ-permeable dye and locally induced Ca(2+) signals). Pharmacologic inhibition of GJ formation in HeLa-Cx43 cells reduced apoptosis significantly. The role of GJ communication was further analysed by the expression of truncated Cx43 proteins with and without channel-forming capacity. Activation of caspases was higher in cells expressing the channel-building part (HeLa-Cx43NT-GFP) than in cells expressing the channel-incompetent C-terminal part of Cx43 (HeLa-Cx43CT-GFP) only. A hemichannel-dependent release and, hence, paracrine effect of proapoptotic signals could be excluded since the addition of a peptide (Pep)-blocking Cx43-dependent hemichannels (but not GJs) did not reduce apoptosis in HeLa-Cx43 cells. Treatment with SN resulted in a significant higher increase of the intracellular free Ca(2+) concentration in HeLa-Cx43 and HeLa-Cx43NT-GFP cells compared with HeLa-CTL or HeLa-Cx43CT-GFP cells, suggesting that Ca(2+) or a Ca(2+)-releasing agent could play a signalling role. Blocking of inositol triphosphate receptors reduced the SN-induced Ca(2+) increase as well as the increase in apoptosis. Our observations suggest that Cx43 and Cx40 but not Cx37 promote apoptosis via gap junctional transfer of pro-apoptotic signals between cells.