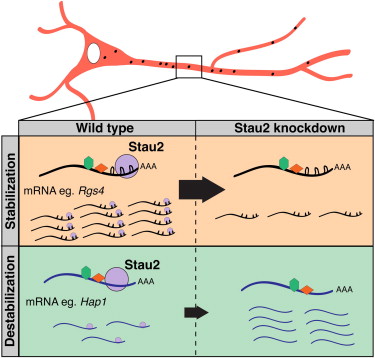 RNA-binding proteins play crucial roles in directing RNA translation to neuronal synapses. Staufen2 (Stau2) has been implicated in both dendritic RNA localization and synaptic plasticity in mammalian neurons. Here, we report the identification of functionally relevant Stau2 target mRNAs in neurons. The majority of Stau2-copurifying mRNAs expressed in the hippocampus are present in neuronal processes, further implicating Stau2 in dendritic mRNA regulation. Stau2 targets are enriched for secondary structures similar to those identified in the 3' UTRs of Drosophila Staufen targets. Next, we show that Stau2 regulates steady-state levels of many neuronal RNAs and that its targets are predominantly downregulated in Stau2-deficient neurons. Detailed analysis confirms that Stau2 stabilizes the expression of one synaptic signaling component, the regulator of G protein signaling 4 (Rgs4) mRNA, via its 3' UTR. This study defines the global impact of Stau2 on mRNAs in neurons, revealing a role in stabilization of the levels of synaptic targets.