Fused in sarcoma (FUS): An oncogene goes awry in neurodegeneration 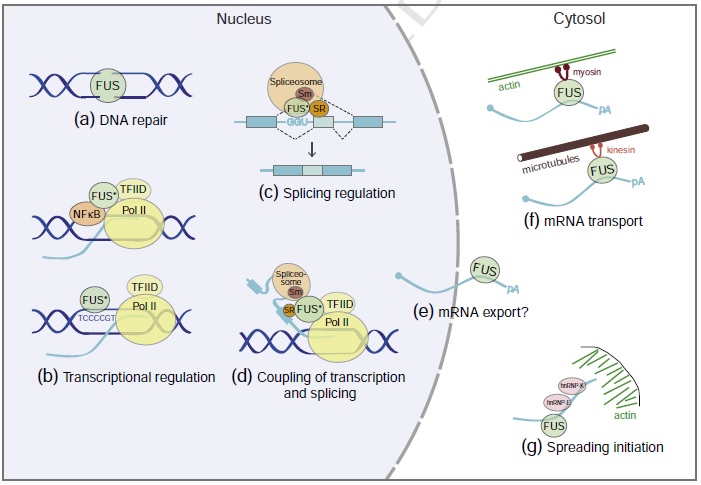 Fused in sarcoma (FUS) is a nuclear DNA/RNA binding protein that regulates different steps of gene expression, including transcription, splicing and mRNA transport. FUS has been implicated in neurodegeneration, since mutations in FUS cause familial amyotrophic lateral sclerosis (ALS-FUS) and lead to the cytosolic deposition of FUS in the brain and spinal cord of ALS-FUS patients. Moreover, FUS and two related proteins of the same protein family (FET family) are co-deposited in cytoplasmic inclusions in a subset of patients with frontotemporal lobar degeneration (FTLD-FUS). Cytosolic deposition of these otherwise nuclear proteins most likely causes the loss of a yet unknown essential nuclear function and/or the gain of a toxic function in the cytosol. Here we summarize what is known about the physiological functions of the FET proteins in the nucleus and cytoplasm and review the distinctive pathomechanisms that lead to the deposition of only FUS in ALS-FUS, but all three FET proteins in FTLD-FUS. We suggest that ALS-FUS is caused by a selective dysfunction of FUS, while FTLD-FUS may be caused by a dysfunction of the entire FET family. This article is part of a Special Issue entitled 'RNA and splicing regulation in neurodegeneration'.