Prevalence of cortical superficial siderosis in patients with cognitive impairment 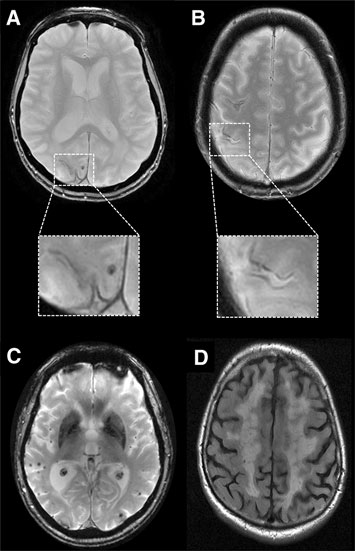 Cortical superficial siderosis (cSS) is a magnetic resonance imaging marker of cerebral amyloid angiopathy (CAA) and can be its sole imaging sign. cSS has further been identified as a risk marker for future intracranial hemorrhage. Although uncommon in the general population, cSS may be much more prevalent in high risk populations for amyloid pathology. We aimed to determine the frequency of cSS in patients with cognitive impairment presenting to a memory clinic. We prospectively evaluated consecutive patients presenting to our memory clinic between April 2011 and April 2013. Subjects received neuropsychological testing using the Consortium to Establish a Registry for Alzheimer's Disease battery (CERAD-NP). Two hundred and twelve patients with documented cognitive impairment further underwent a standardized 3T-MR-imaging protocol with T2*-weighted gradient-echo sequences for detection of cSS. Thirteen of 212 patients (6.1 %) displayed cSS. In seven of them (54 %) cSS was the only imaging sign of CAA. Patients with cSS did not differ from patients without cSS with regard to medical history, age or cardiovascular risk profile. Subjects with cSS performed worse in the mini-mental state examination (p = 0.001), showed more white matter hyperintensities (p = 0.005) and more often had microbleeds (p = 0.001) compared to those without cSS. cSS is common in patients with cognitive impairment. It is associated with lower cognitive scores, white matter hyperintensities and microbleeds and can be the only imaging sign for CAA in this patient group.