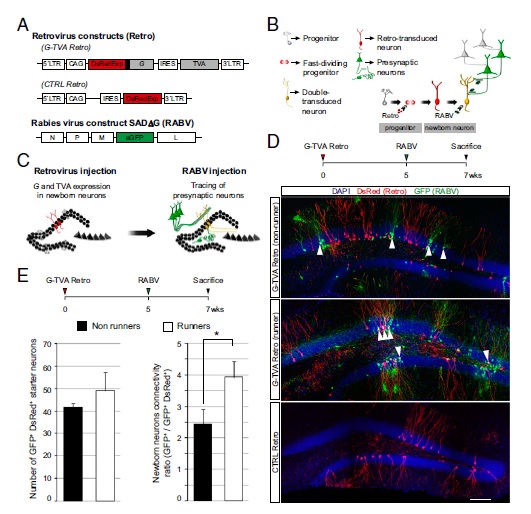 Identifying the connectome of adult-generated neurons is essential for understanding how the preexisting circuitry is refined by neurogenesis. Changes in the pattern of connectivity are likely to control the differentiation process of newly generated neurons and exert an important influence on their unique capacity to contribute to information processing. Using a monosynaptic rabies virus-based tracing technique, we studied the evolving presynaptic connectivity of adult-generated neurons in the dentate gyrus (DG) of the hippocampus and olfactory bulb (OB) during the first weeks of their life. In both neurogenic zones, adult-generated neurons first receive local connections from multiple types of GABAergic interneurons before long-range projections become established, such as those originating from cortical areas. Interestingly, despite fundamental similarities in the overall pattern of evolution of presynaptic connectivity, there were notable differences with regard to the development of cortical projections: although DG granule neuron input originating from the entorhinal cortex could be traced starting only from 3 to 5 wk on, newly generated neurons in the OB received input from the anterior olfactory nucleus and piriform cortex already by the second week. This early glutamatergic input onto newly generated interneurons in the OB was matched in time by the equally early innervations of DG granule neurons by glutamatergic mossy cells. The development of connectivity revealed by our study may suggest common principles for incorporating newly generated neurons into a preexisting circuit.