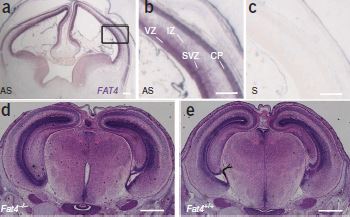 The regulated proliferation and differentiation of neural stem cells before the generation and migration of neurons in the cerebral cortex are central aspects of mammalian development. Periventricular neuronal heterotopia, a specific form of mislocalization of cortical neurons, can arise from neuronal progenitors that fail to negotiate aspects of these developmental processes. Here we show that mutations in genes encoding the receptor-ligand cadherin pair DCHS1 and FAT4 lead to a recessive syndrome in humans that includes periventricular neuronal heterotopia. Reducing the expression of Dchs1 or Fat4 within mouse embryonic neuroepithelium increased progenitor cell numbers and reduced their differentiation into neurons, resulting in the heterotopic accumulation of cells below the neuronal layers in the neocortex, reminiscent of the human phenotype. These effects were countered by concurrent knockdown of Yap, a transcriptional effector of the Hippo signaling pathway. These findings implicate Dchs1 and Fat4 upstream of Yap as key regulators of mammalian neurogenesis.