Stress Granules in Neurodegeneration - Lessons learnt from TDP-43 and FUS 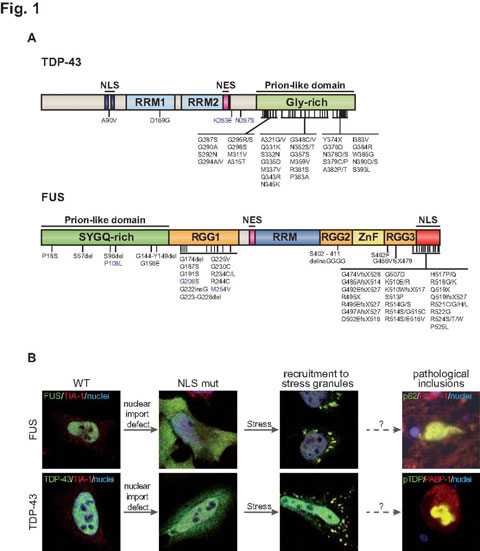 Stress granules (SGs) are cytoplasmic foci that rapidly form when cells are exposed to stress. They transiently store mRNAs encoding house-keeping proteins and allow the selective translation of stress-response proteins, for example heat shock proteins. Besides mRNA, SGs contain RNA-binding proteins, such as TIA-1 and PABP-1, which can serve as characteristic SG marker proteins. Recently, some of these SG marker proteins were found to label pathological TDP-43- or FUS-positive cytoplasmic inclusions in patients with amyotrophic lateral sclerosis (ALS) and frontotemporal lobar degeneration (FTLD). In addition, protein aggregates in other neurodegenerative diseases, e.g. Tau inclusions in Alzheimer's disease, show a co-localization with TIA-1 as well. Moreover, several RNA-binding proteins that are commonly found in SGs have been genetically linked to neurodegeneration. This suggests that SGs might play an important role in the pathogenesis of these proteinopathies, either by acting as a seed for pathological inclusions, by mediating translational repression, by trapping essential RNA-binding proteins or a combination of these mechanisms. This review gives an overview of the general biology of SGs and highlights the recently identified connection of SGs with TDP-43, FUS and other proteins involved in neurodegenerative diseases. We propose that pathological inclusions containing RNA-binding proteins, such as TDP-43 and FUS, might arise from SGs and discuss how SGs might contribute to neurodegeneration via toxic gain or loss-of-function mechanisms.